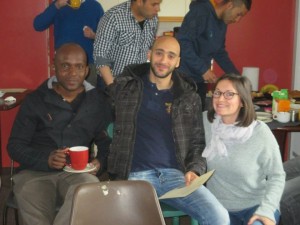 Our Personal Advocacy is centred on peoples need. Filling out forms and finding the right documents can be stressful and confusing at the best of times, let alone in a new country and often in a new language.

At TIRC we try to offer as much guidance and help as we can with settling in to Irish life. We can help with filling out forms and advice on how to navigate bureaucracy, such as getting a PPSN number, finding a house and finding work.

In this section we provide information on some common issues and questions. Any further information please contact us on 0667127918 or reception@tirc.ie

Our political advocacy attempts to positively influence the bureaucracy that service users have to navigate. We work towards raising awareness of important issues that affect new migrants and Asylum Seekers such as Direct Provision and the International Protection Bill.

Change in law proposed by the International Protection act, 2015

The International Protection Act, 2015 was enacted on the 30th of December, 2015. Under the new law, a single application process is designed for obtaining refugee status and subsidiary protection.

Salient features of the 2015 Act

Who is a Refugee?

A refugee is a person who owing to the well-founded fear of being persecuted by reason of race, religion, nationality, political opinion or membership of as particular social group is outside his or her country of nationality or habitual residence and is unable or unwilling to avail the protection of that country or return to that country. An asylum seeker is a person who seeks to be recognized as a refugee.

Documents to be included with the application

The application should be accompanied by the applicant’s original travel document like the passport, original identity documents, birth and marriage certificates if relevant.

An interpreter can be made available whenever possible and necessary. If the claim of an asylum applicant is  to be prioritized, they will be informed of this at the time of the preliminary interview.

Direct Provision System: Under this system asylum seekers are provided with full board accommodation free of utility or other costs.

The asylum seeker applicants are not obligated to avail themselves of the accommodation provided by the RIA. They may choose to live with friends or relatives or make use of their own resources to source accommodation.

If the recommendation of the ORAC is positive then the Minister for Justice and Equality will make the declaration that the applicant is a refugee except where questions of national security or public policy arise.

Programme refugees are usually persons invited in to Ireland by the Government in response to a humanitarian crisis or at the request of the United Nations High Commissioner for Refugees (UNHCR). The names of such persons are usually entered in the register maintained by the Minister for Foreign Affairs.

Ireland joined the UNHCR Resettlement Programme in 1998 and has been accepting a specific number of applicants each year. Most recently, Ireland has established the Irish Refugee Protection Programme and agreed to accept migrants fleeing the conflict in Syria under the EU-wide resettlement scheme proposed by the European Commission.. The people admitted to Ireland for permanent resettlement are granted ‘programme refugee status’ on arrival.

In the normal course, programme refugees are initially accommodated by the Reception and Integration Agency for a period to facilitate a language training and orientation programme while the accommodation is sourced in local communities.

Subsidiary protection is granted to a person in respect of whom substantial grounds have been shown for believing that the person concerned if returned to his or her country of origin would face a real risk of suffering serious harm and who is unable or owing to such risk unwilling to avail himself or herself of the protection of that country. ‘Serious harm’ means  serious threat to an individual’s life or person including threat of execution, torture and degrading punishment because of indiscriminate violence in the situation of an international or internal armed conflict.

Seeking asylum in Ireland is an easy process

This is one of the largest misconceptions. Seeking Asylum in Ireland is a long and incremental process involving filling out a questionnaire, an Interview stage (after which most Asylum seekers can expect to be denied asylum) and a Appeal Stage. Each stage is slow and details of the application are closing reviewed and studied by deciding officers. If recognised as a Refugee he/she is entitled to remain in the state and is afforded the rights under Irish law.

Ireland has a relatively high number of Asylum seekers

The number of Asylum seekers in Ireland is constantly growing.

There has been a 63% decrease in asylum applications in Ireland since 2002.

Asylum seekers do not receive large sums of money from the state as they awaited decisions on their status within this country. Each adult Asylum Seekers receives a personal allowance of €19.10 per week and €9.60 for each child. They do not enjoy free cars and phones from the state as reported by some outlets.

Asylum seekers have a high standard of living and enjoy personal freedom in the Irish state, better than many Irish Citizens

Asylum seekers are expected to stay at the regional centre while their application for a declaration as a refugee is being processed. Accommodation is full board, which includes bed, breakfast, lunch, and evening meal. However Asylum seekers are not allowed to seek alternative accommodation in the private rented sector during this time and have very little freedom. They are not allowed to be absent from their designated accommodation centre for more than 3 consecutive nights. If they are, the Reception and Integration Agency (RIA) will deem the bed space abandoned. They have to abide by House rules posted in each accommodation centre. While resident in the centres, they must abide by these rules.

Asylum seekers receive large sums of money from the state for cars, mobile phones and drink

Fact: They get full-board accommodation (shared, hostel type) while applications are processed. Adult Asylum Seekers only get €19.10 a week while children get €9.60. This tiny amount is supposed to cover all costs. They do not enjoy free cars and phones from the state as reported by some outlets.

Fact: By law, they are barred from working while their cases are examined. Only recognised refugees are allowed to take up employment. Many asylum-seekers become active volunteers in their local communities while waiting for decisions on their applications

Asylum Seekers are not entitled to work or carry on any business, trade or profession.

Returning home in safety and dignity is the solution best preferred by refugees. For example, the majority of the Kosovars who were given safety in Ireland in 1999 voluntarily returned home when it was safe.

Crime is high among Asylum Seekers

There is no evidence that the rate of crime is higher among asylum-seekers or refugees than in the population as a whole. Asylum-seekers and refugees are also the victims of crime, including sometimes violent assault and harassment.

Asylum Seekers do not contribute to Irish Society

This is one of the greatest and most unjust misconception surrounding Asylum seekers. Many asylum-seekers become active volunteers in their local communities while waiting for decisions on their applications. They are involved in voluntary groups, classes and share their culture generously to the benefit if Irish Society

Working Group to Report to Government on Improvements to the Protection Process, including Direct Provision and Supports to Asylum Seekers